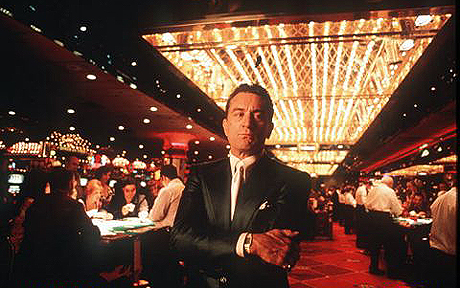 It has recently been reported that Hollywood legend Robert De Niro is being courted to play the lead role in the new film adaptation of Gambling Man, the gambling memoir written by Gary Green. The story includes a series of exciting antics and adventures from the life of the infamous Casino boss. Borsalino Productions has revealed that it can think of no better actor to portray the controversial Gary Green than Robert De Niro, the seasoned and highly lauded actor who has starred in over ninety films through his career.

Although Borsalino Films has bought the film option to Gambling Man, the project has so far not really lifted off the ground as there is no writer and no director on board.

However, a press release has been released saying that De Niro was being sought for the lead role. Borsalino Films said, “The plot line will be nothing short of epic, like the book, pulling no punches as it traces the boss’ personal  escapades through the history of the Casino world from the last days of Meyer Lansky to Green’s adventures as a Donald Trump Vice President.”

Interestingly Robert De Niro has taken on many roles that see him participating in gambling on some level or another, the most recent of which being last year’s Last Vegas, but of course not forgetting his role in the classic gambling movie Casino.

However, De Niro's participation in the project is yet to be confirmed, which is perhaps due to the fact that he is in very popular demand at the moment, it seems, having starred in 6 films in 2013 and with another four (The Bag Man, Hands of Stone, The Intern and Candy Store) in the pipeline for the next year or so.

Watch this space for updates on further casting for Gambling Man and to be the first to hear if De Niro takes on the role.