Play Thunderstruck on your Smart Watch with Royal Vegas 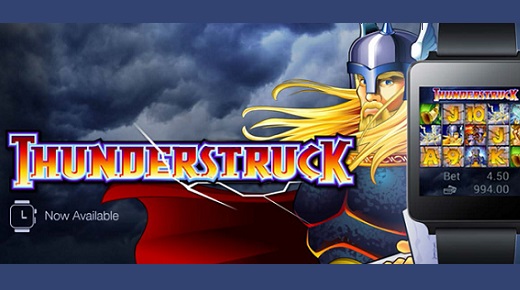 A mere ten years ago we would have laughed at the idea of being able to play games on a watch as the sort of nonsense you get in a science fiction movie. Well, flying cars may still be a long way off but, thanks to Royal Vegas Casino, smart watch gaming is very much here. Microgaming has now launched online slot favourite Thunderstruck as a Smart watch game and premium online casino Royal Vegas has brought it directly to us via the best Android smart watches.

How does it Work?

If you are the proud owner of an Android smart watch and you’ve paired it to your mobile phone or tablet device, you can play Thunderstruck on you watch today. The game uses the shared internet connection between your watch and mobile device, but it’s the watch’s touchscreen that features the controls for the game. That means you could even sit in a meeting playing this popular game and look like you’re just adjusting the time on your watch. All of the banking processes take place through your phone so if you need to deposit some more money you’ll need to jump onto the mobile app and make a secure deposit; the same goes for cashing out your winnings.

Which Devices are Compatible?

At the time of writing, the following Android smart watch devices were compatible with the Royal Vegas Thunderstruck smart watch edition: